Lucama, NC ­– Growing up my parents always used to tell me to never give up on things I believed in, or were passionate about. I thank them for that everyday because it has made me a stronger person today. Those same values must have been instilled in Tyler Ankrum the young man from Colton California, who has really taken the Late Model Community by storm.

This past November we awarded Ankrum a Hard Charger award for his effort at the 2014 Autumn Classic (Tyler Ankrum Wins Autumn Classic Hard Charger Award) at none other than Southern National Motorsports Park. A motor swap was the reason Ankrum had to start in the rear of the field during that race, this time it was mishap during qualifying. Ankrum was coming out of turn four to take the green flag when the rear end snapped loose and sent him for a slow spin down the front stretch. With no steam behind him at the line you can only imagine how qualifying turned out for him.

Earlier that afternoon I confirmed with CARS Tour officials that the top twenty-five times during qualifying will be locked into the show, the remaining cars will be sent to a 20 lap Last Chance Qualifier race where the top four finishers from that move on. In addition, a provisional shall be awarded to one driver to make up a thirty-car field.

END_OF_DOCUMENT_TOKEN_TO_BE_REPLACED 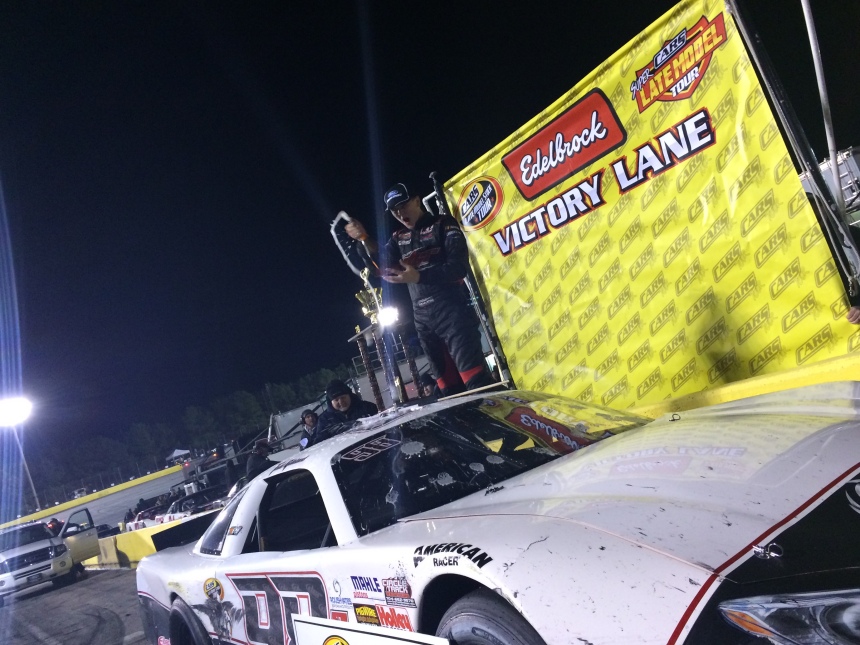 Lucama, NC – Last but not least, we saved the best for last, holy crap… just a few sayings that came to mind when the checkered flag flew in the breeze Saturday night at Southern National Motorsports Park for the inaugural CARS Tour Late Model Stock Car race. The second 150-lap feature on the evening saw a very impressive thirty-car field, six cars were sent packing after qualifying and the last chance race, take the green flag to kick the season off!

Teams from all over the eastern seaboard spent weeks building and testing their machines to prepare for this weekend and the caliber of competition that rolled through the small town of Kenly, North Carolina were insurmountable.

Gilliland’s victory was his first in a Late Model Stock Car and comes after an incredible second place finish last year at SNMP during the Autumn Classic while driving a Limited Late Model. Though Gilliland was fastest in final practice earlier that afternoon, his victory did not come easy, nor did it lack excitement. Though Gilliland found himself at the top of the leader board during the final practice – that was extended might I add, I am guessing due to the rain before – but that however did not transfer over to qualifying. That honor would go to none other than the #08 of Deac McCaskill.
END_OF_DOCUMENT_TOKEN_TO_BE_REPLACED

The trio join three more Virginia stock car racing natives Hermie Sadler, Jeb Burton and Gray Gaulding in going to battle against the likes of Late Model drivers Matt Bowling, the 2014 Showdown winner, and CE Falk, who was the first Late Model winner of the Showdown in 2010 at Southside Speedway.

“With a record amount of drivers committed to run the Short Track Showdown, this event looks to be one of the most competitive fields that we have seen,” said Hamlin, another Virginia native who last won the Showdown in 2011 at Richmond International Raceway. “None of these drivers like to lose, they are all as competitive as I am. Anyone of them can make it to victory lane.”

END_OF_DOCUMENT_TOKEN_TO_BE_REPLACED

Lucama, NC – Cole Timm, of Charlotte North Carolina, sent a massive statement this past Saturday night at Southern National Motorsports Park to the entire Super Late Model community. Timm, who has run regular races in the PASS South series last year as well as this year, had a bit of a disagreement with his regular sanctioning body so he figured why not give this brand new series a shot. Well folks, this boys idea of trying things out are just a bit different than yours and my idea of “trying something out.”

Not really sure if Timm came to SNMP to have a good time, test a new series out or just flat out prove a point! “I consider myself just a small time racer,” Timm said during his victory lane celebration. “Just to be able to beat some of these bigger name guys on this CARS Tour means a lot to me!”

Shouldn’t come as to much of a surprise however, I say that lightly and with out sounding cocking but those hopes are set when your number sits alone on top of the leader board both practice sessions. Not to mention go out for qualifying and be the only car to break into the 14-second lap time, a 14.788 (97.376 MPH) to be exact! More than two tenths faster than the Kyle Busch Motorsports, yes I said that right folks, the KBM #51 of Christopher Bell.

END_OF_DOCUMENT_TOKEN_TO_BE_REPLACED

Matt Slye Kicks Off Season 2 of The Driver Series

“Racing is something my family has always been involved in,” Matt Slye, driver of the #33 Modified. Born in New York and now living in Williamsburg Slye has very fond memories of going to the races at Oswego Speedway with his family, growing up watching his uncle Mark race. “My uncle was… or is a very successful racecar driver and my grandfather was very involved with his racing,” commented Slye. Racing was a common bond Matt shared with his grandfather not to mention something he always wanted to try.

“I raced a Grandstock back in 06 and 07,” Slye tells The Weekly Racer. “I didn’t have much success which was touch for me!” He was used to showing up to the track with his uncle and winning. I can see how that would be frustrating, think about something in your personal life or work life where you were good. Now think about when your boss saw how good you were, or you thought you were good and took another job with more responsibility only to find out it wasn’t working out! Matt would end up selling that car and didn’t run another race till much, much later.

“Mark had a lot of success in the modified division, so we decided to go back to what we knew.” Matt also told us the moment he first got into one he had made up his mind what he wanted to race. “Light car, small tires, and lots of horsepower makes for a good time!” The team had Bret Hamilton, well known chassis builder in the modified division, build a brand new chassis for them. The crew ran their first season in the modified at Langley Speedway ultimately finishing the season fourth in points and taking home Rookie of the Year honors. The following year was a bit tough for Slye and his team, only running a partial season.

2013 was really the turning point for Matt and his time in the modified. This time finishing third in the points at South Boston but more importantly grabbing his first win. “I had ran decent and finished second seven times but I was never able to get that elusive win,” Slye said. “When I won that race I finally felt like I could run with these guys. It really changed how I approached racing mentally.”

2014 was another short year for the team due to funding, Slye however, was not far off the pace when he did hit the track in 2014. Running just 5 races that year the team was able to finish inside the top five in each one. Not to mention grab a pole and a win, a win I feel was a little over shadowed but a win nonetheless!

Plans for the 2015 season are still up in the air a bit as the team still looks for funding, “If the money comes through we will be racing a lot. Mark caught the racing bug again decided to build a new modified so we plan on having him at some races, me at some races, and both of us at a couple or races.” The team seemed pretty excited and optimistic about what the 2015 season has in store for them.