Posted on January 28, 2015 by Justin Kern Leave a comment 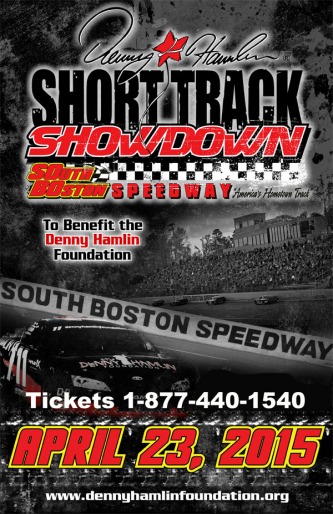 SOUTH BOSTON, VA – The Denny Hamlin Foundation announced today that April 23, 2015 marks the eighth edition of the Denny Hamlin Short Track Showdown and the second consecutive year the celebrity Late Model charity race will be held at South Boston Speedway (Va.). The Showdown, which features top NASCAR drivers competing against the best regional Late Model drivers, again serves as a weekday prelude to the weekend NASCAR races at Richmond International Raceway.  Proceeds from the Showdown go to support the Denny Hamlin Foundation, which has donated $150,000 in grants to help fund the Denny Hamlin Cystic Fibrosis Research Lab at Children’s Hospital of Richmond at VCU and support the Cystic Fibrosis Foundation-accredited Therapeutics Development Center at VCU.

“Keeping the race at South Boston for 2015 was a no-brainer for me,” said Hamlin, who regularly raced at South Boston before he made the jump to NASCAR. “Not only did it bring back a little bit of NASCAR to the South Boston community, it also brought one of the most competitive fields we have seen at this event so far.  The fans nearly sold out South Boston last year, and with the interest that we have already seen this year, I believe we will sell-out South Boston, and provide fans with another thrilling event.”

The driver line-up will be announced closer to the event, but Hamlin expects last year’s winner Matt Bowling, a Whelen All-American Series driver, to be first in line. Previous race winners include Kyle Busch, Hamlin, Tony Stewart, and C.E. Falk. Falk’s thrilling victory in 2010 at Southside Speedway, along with Bowling’s late race pass at South Boston last year, make Falk and Bowling the only non-NASCAR Sprint Cup Series drivers to win the event.

The Denny Hamlin Short Track Showdown began in 2008 at Southside Speedway, a local short track near Hamlin’s hometown of Chesterfield, Va., outside of Richmond, before moving to Richmond International Raceway in 2011 to pair up with the NASCAR K&N Series. In 2014, the race moved just over 100 miles to the southeast of Richmond to South Boston Speedway, another short track with a long history in stock car racing.  The annual race serves as a foretaste for fans attending the Toyota Owners 400 NASCAR Sprint Cup Series race two nights later at Richmond International Raceway.

“I am extremely excited about hosting the event again this year,” said Cathy Rice, general manager of South Boston. “I felt it was a learning year for us last year and it turned out to be a great success.  We want to thank everyone involved and especially Denny for making the announcement at our event last year that the Showdown would be back at South Boston again in 2015. That was awesome. We are truly honored to be able to support the Denny Hamlin Foundation and the great work they do.”

Advance tickets to the Short Track Showdown go on sale starting February 11 at the South Boston Speedway ticket office or by calling the track’s ticket hotline at 1-877-440-1540. The first 1,100 fans to order tickets will receive the advance ticket price of $20. After the first 1,100 advance tickets are sold, the prices increase to $25. Children ages 6 and under are free with an adult ticket purchase. Season passes are not honored for this special event.

For more information, visit the South Boston Speedway website at southbostonspeedway.com and dennyhamlinfoundation.org.

Open since 1957, South Boston Speedway has earned a reputation as the home of the best NASCAR-sanctioned short track racing in the country. The 4/10-mile, quad-oval has been the stomping ground for many of NASCAR’s top racers, as well as the breeding ground for some of the most talented NASCAR racing stars. South Boston last hosted a national touring NASCAR race in 2003 when the NASCAR Craftsman Truck Series visited for a final time. The NASCAR Busch Series regularly ran there until 2000, while the last NASCAR premier series race, now known as the Sprint Cup Series, was held in 1971. Today, the track affectionately known as SoBo, hosts weekly NASCAR Whelen All-American Weekly Series events plus several touring and special events, including the NASCAR Whelen Southern Modified Tour. Spectator capacity is 10,000.

The Denny Hamlin Foundation (“DHF”) is committed to raising awareness and funds for the specific needs of children with Cystic Fibrosis (“CF”). As such, DHF partners with organizations that focus on CF research, treatment advances, and overall quality of life care. The Foundation will also support children with other chronic diseases. To carry out its mission, DHF conducts fundraising events, accepts contributions, grants, and gifts of money and property; and will invest the same and/or distribute to other exempt organizations as described in Section 501(c)(3) of the Internal Revenue Code.