Posted on January 2, 2015 by Justin Kern Leave a comment

So last year I made a tiny little post on December 30, 2013 looking back at some of my favorite moments from the racing world (Welcome to the New Year – 2014). If you click the link right there it will take you to that post where I posted an intro video of the 2013 weekly series awards banquet taking a quick look at the top three finishers in the National points along with a list of my top five memories throughout the year.

When I posted that article last year this project was still in the “bumpo” so to speak! I was still figuring out an overall direction and what we wanted to focus on. Since that time we have thrown away the training wheels, removed the bumper guards and looking to take one more and more tracks, drivers and all of the above. I do have to thank all of you, all of the readers, Facebook & Twitter followers! Without any of you all of this would really be for nothing! I also need to thank all of the drivers who have opened their trailers and shared information with me, shared my info with other drivers.

I was going to sit down and compile a little video clip taking a look back at all the awesome things 2014 had in store for us but I got caught up with a few emergencies at work. Throw in the Christmas holiday and I hope you can see why we ran out of time. Have no fear though! I am working on a little something to post for your viewing pleasure!

I have a great feeling about 2015! I think it is really going to test us, and stretch us farther than we have ever gone before. We have a lot of things in the works as we speak, hopefully some exciting new adventures to take you along with, as well as some even better racing. Again thank you to all who made 2014 as great as it was, now lets turn our attention on making 2015 that much better!

2014 marked a historic year for Shawn Balluzzo and his team. Going into the race season with six track championships in the Modified division. Balluzzo went into the year looking to etch his name into the record books along with the great Phil Warren for the most division titles in a single division. Warren was the first and until now, the only driver to win 7 titles in the Late Model division. All year seemed like the team struggled with an uphill battle with the power plant that was constantly wanting to blow up. Balluzzo’s year almost came to a screeching halt when the motor had issues during a practice session two days before the final points race. With only an 18 point lead of Danny Harrell, fellow modified competitor Wayne Harley offered his car up for the weekend. Balluzzo was able to hang on, with the help of an engine issue from Harrell, and capture the 2014 track championship putting his name in the record book next to Phil Warren.

So many things to select from when thinking about East Carolina Motor Speedway in 2014. ECMS was the perfect antidote for The Weekly Racer. Both in their rookie season, both helping each other to grow! I picked this race because of the sheer amount of fun I had covering it! From the moments the gates opened that Saturday morning, talking with all the drivers, the photos and videos I was able to take! Seeing all the cars roll in for an event that was heavy on the hearts of many officials and members of management around that track. 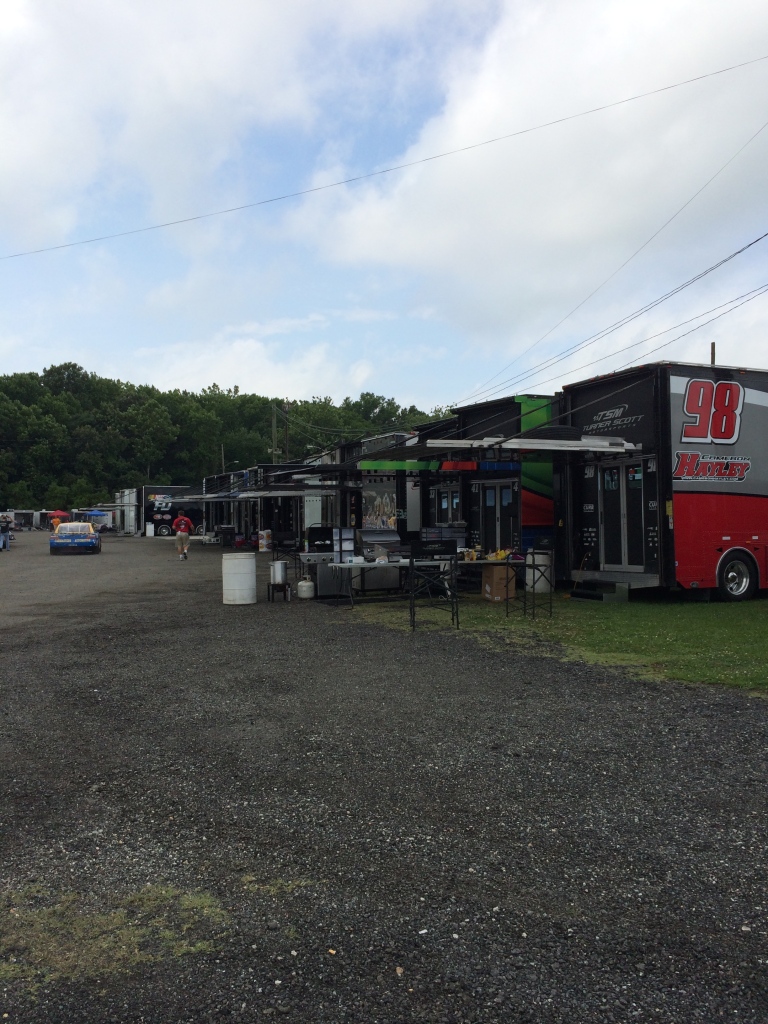 The whole starting idea behind the website was to bring fans closer to the drivers they root for every weekend. I created the Driver Series to do just that, something to show these drivers are often time just like the fans that root for them. As the season went on business picked up more drivers, from more divisions, even from different states wanted to be involved. Then with the help of a friend of mine who works within NASCAR calls me and tells me I have an interview with Josh Wise, and to call him when they were done with practice out in Vegas.

Immediately I knew I had to create another series. I coined the name “Inside the Hauler.” I was helping bring readers inside these to meet these drivers. Next were interviews with Nationwide drivers and even spotters, it was unbelievable! We interviews Sergio Pena from the K&N Series. What really got me the most was when I received a Tweet from Nationwide driver Ryan Ellis asking how he could be apart of the Inside the Hauler Series. Totally an amazing experience.

Since the advent of this three race series between Langley Speedway, South Boston, and Martinsville – all being in my home state – I told myself I wanted to go to all three of these races in the same year. This was even before TWR was a twinkle in my eye. Of course the Hampton Heat at Langley Speedway was always my easiest to attend with the track being practically in my backyard. Distance wasn’t much of an issue with the other two, it was more so being able to coordinate time off with a work schedule that was working around your school schedule.

So of course I was able to make it to Langley to see 30+ LMSC start, which by the way what an incredible site! If it weren’t for the rain, the incredibly late start I don’t feel we would have had so many cautions, either way to see C.E. Faulk make it three wins again was historic. We were also able to make it out to SoBo and despite a little bit of rain were able to cover an awesome race where we finally got to see what all the Lee Pullman hype was about.

To top it all off we were able to head out to Martinsville and not only watch but cover our very first MDCU 300! The planets did not align that weekend so we were not able to get to both days but being able to make it for the big race Sunday enough was like an early Christmas present! The amount of cars, being in the press box, down on pit road. Truly an amazing memory that will stay with me forever.

Not a race we went to cover, and not really so much in the scope of the racing we cover either! However, this trip was without a doubt number one on my list of things done in 2014, and very well may fall in the top three of all time. First time in the heart of NASCAR, first time watching the World of Outlaw cars and it just so happens to be on a three-day event at the World Finals!

Three days of friends, NASCAR garages, and some insane racing on a short dirt track where drivers have no spotters, hauling into the turns sideways doing 100+ mph. I am not even going to lie I was a little start struck. Now I have been to some dirt track racing around where I am from, but nothing compared to how this show was run. This by far topped the 2014 race season for me, so much so we have already put the ball in motion to return next year!

If you have never been to The Dirt Track down in Charlotte it comes highly recommended from everyone here at The Weekly Racer. These are some of the best drivers ever to take seat inside of a race car! It was literally non stop action once we got to the track. Officials would send cars out in groups for their three laps of practice/qualifying and that was it till race time. Over 200 cars easy took the track each day for three days straight! If you call your self a race fan this event needs to go on your “To Do List.”