Posted on November 30, 2014 by Justin Kern Leave a comment

Kenly, NC – LIVE for Day 2 of the Thanksgiving All-Star Classic here at Southern National Motorsports Park. Make sure to join us for lap-by-lap coverage of on our Twitter account (@theweeklyracer). Two divisions running today, UCARs for 50 laps followed by 150 lap Limited Late Model feature. The track invites all those in attendance on the front stretch for an autograph session from 12:20 PM till 1:20 PM. On track activities get under way at 1:30 PM.

Chris Johnson & Justin Carroll Make It Two In A Row

Posted on November 30, 2014 by Justin Kern Leave a comment

Lucama, NC – Chris Johnson made it two in a row at Southern National in the 2014 edition of the Thanksgiving All-Star Classic. Johnson took the lead away from Humblet in the almost caution free feature on lap 33 and immediately put two cars between the two. Early, it looked like Jimmy Humblet was going to be the car to beat, when the green flag was displayed Humblet hit the gas and the nitrous button at the same time.

Not but five laps in Humblet had built himself all but a full straightaway lead over Johnson, you had to look back another eight cars to find third place Shawn Balluzzo. I really wish there was something more interesting to talk about this race but there really wasn’t. Only other interesting thing I learned after the fact was the #77 of Hunter Slayton showed up with his huge motor pretty much to shake things down for the Snowball Derby next weekend – he would pull his machine off at half way and leave it up to everyone else.

The nights one and only caution came from the solo, untouched, random spin of none other than Chris Humblet. Which, has earned him last nights “D’oh Moment of the Race Award” – honestly I am pretty sure this puts him at the top of the list for the entire weekend! By this time in the race all but the top three were the only ones left on the lead lap leaving Humblet & Balluzzo the only ones eligible for the cone, no one took the bait creating a single file, green-white-checkered.

END_OF_DOCUMENT_TOKEN_TO_BE_REPLACED

LIVE on Twitter (@theweeklyracer) for Day 1 of the 2014 Thanksgiving All-Star Classic. LIVE coverage from Limited Late Model & Modified qualifying. As well as the 50 lap feature for the modified race.

This is Why They Always Say “Double Check Those Belts!”

Let me be the first to say I am very glad that no one got hurt because this could have gone seriously wrong! Other than that, where do you go to sign up for this??? 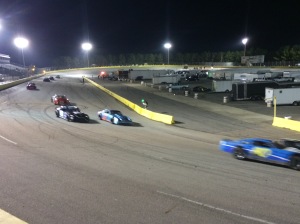 Lucama, NC – A cold night to say the least down in North Carolina to kick off the annual Thanksgiving All-Star Classic at Southern National Motorsports Park. While some were up bright and early to stand in line and fight for their right to buy the $300 TV, others were packing up race car trailers and heading to North Carolina for some racing.

The ever popular Street Stock division was the highlight of the evening running a 50 lap feature. Jeff Melton set the fast time in qualifying with a time of 16.605 (86.721mph) only to be waisted 500 feet past the stripe. As the field took the green flag outside pole sitter Mike Keith must have spun the tires and immediately hooked left. Melton & Keith had a crash course with the inside retaining wall that took both cars out of contention. Mike Keith would attempt to return to the speedway but the damage was too much for the car. This would allow Ledbetter and Barnett to move up to the front row.

As the green flag was displayed to the field Gary Ledbetter nailed the gas – as most race car drivers do at that time of the evening – and took off into turns one and two with Greg Barnett on his flank. These two would build a pretty large over Ganoe and Council, who spent a good amount of laps nose to tail working on each other before Council finally got around him for third spot.

Things were pretty smooth sailing for the first half of the race as I would imagine some drivers were trying to save tires. Remember this was a little bit longer of a race than what some of these guys are used to. Greg Barnett was finally able to make the pass for the lead on lap 27 after hanging on to the rear bumper of Ledbetter. Just four laps later we got the nights first caution as the #10c of Chris Conner went for a solo spin in turn two.