Posted on September 30, 2014 by Justin Kern Leave a comment 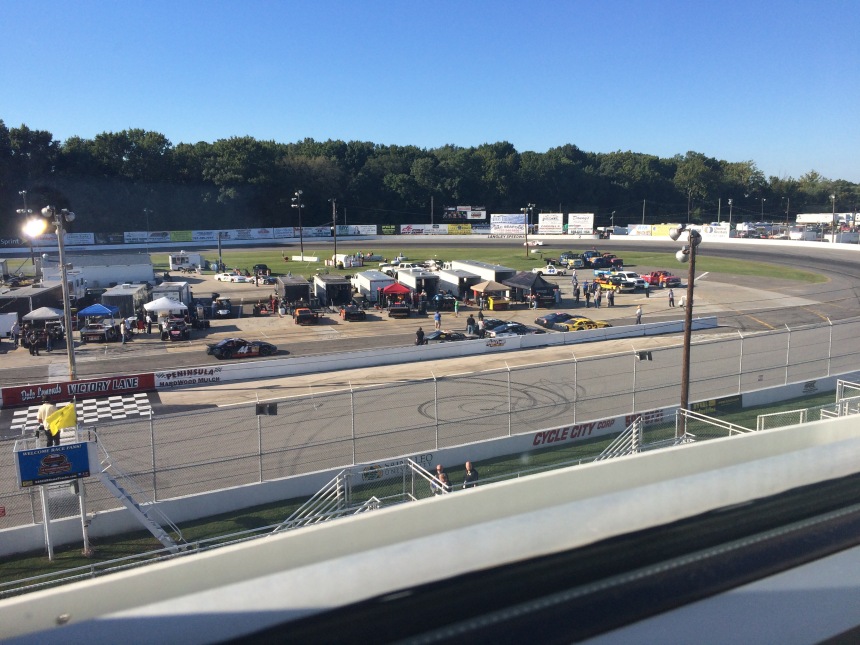 Hampton, VA – Langley Speedway officially closed out the 2014 season this past weekend with another eight division night. Champions were crowned in each division including the Enduro division which we did not cover. I have split these recaps again due to the fact there was so much going on throughout the day. It was a bitter-sweet moment when the final checkered flag waved knowing the season is official over.

Just like that the final 20 laps of the season for the Rhonda Clairborne Pro Wing Karts. Matt Leach was able to jump into the lead spot off of turn four coming to the checkered flag with a big push from Ryan Hudgins. The race would go caution free but not incident free as we had just one solo spin, his kart would remain under power and able to pull away.

It was very surprising how calm this race was given the fact these karts rely on the draft much like a super speedway in the cup series. The top nine cars ended up pulling away from Amanda Frye who was stuck in limbo pretty much – can’t catch the lead pack and has to wait for the karts behind her.

It was pretty much “smooth” sailing for the rest of the way, minus the one kart spin and the mix up in the back of the pack.

Even though Charlie-Ray Lorah came across the stripe in the third position it was enough to lock up his second Pro Wing champ kart title here at Langley Speedway.

Michael Waters qualified his #2 truck on the pole for their championship race. Chase McAdams comes into this race holding onto a very slim two point lead over Colby Vance.

When the green flag waved over this one Waters lead wire to wire in dominating fashion in the largest field of the entire season it seemed like. Chase McAdams would ride in the second position all race and bring home the track championship.

The most interesting moment of the race that actually made race director Jimmy Walker point the black flag at Bill Wallace when he dove into turn three slamming into the rear of Colby Vance and getting his car a little loose. Nothing else would come of that as Wallace moved past Vance in the following lap and took off.

Well the Grandstock division was just about cut in half for this championship race but that did not take away from the drama. Brandon Hinson was the fast car this afternoon and lead a good portion of the race before slowing way up coming off turn two almost collecting the wall. Boyd would eventually get by Sweeney on lap 35 and leave him to deal with the 19 of Bubba Johnston. The two would lean on each other a little too much and go for a spin bringing out the second caution on the night on lap 36.

The first caution came when points leader Mark Frye had a scary moment in four. Frye came into the night with a 7* point advantage over Sweeney and knew he just had to bring the car home in one piece. You could tell Frye was in conservation mode because he almost went a lap down.

Just as he went to let the faster cars go by on his outside his car just spun around and landed in the ditch. After bringing his machine to the attention of his crew they found he had a right front tire go down. They would change it and send him back out to the field.

On the final restart on the evening Sweeney and Johnston were like rockets on the outside, passing Frye like he was standing still. It was not enough though and Boyd would hold onto the win for the second time of the season and second time in a row. Sweeney was able to move up the second position with Johnston coming home third. Driskil comes home fourth and Frye fifth.

There was not enough difference between Sweeney and Frye and would hand the championship over to Mark Frye for the first time in his career!

Landion Florian came into the night with a nine-point deficit to Bobby Hall but was able to put his machine on the pole. Bobby Hall the points leader would just have to finish eight or better to lock up his title. Everything was running smooth until lap thirteen when the #14 J.B Sipe went for a spin in turn four. No real damage to his car or anyone else so a quick caution and back to green flag racing.

Just like they always say, cautions bread cautions because the 23 of Casey Sipe would go for a spin in turn two to bring out the caution. Just a couple hundred feet down the track we found Travis Wall into the wall down in turn three. He would have to bring his ride, sporting new white wall tires down to his crew, his night would eventually be done.

The third caution of the evening came from Nelson Moody hitting the wall going into turn one. Another one bites the dust is how the song goes and he pulled his machine behind the wall calling it quits. Landon Florian was able to pilot his machine to his fourth victory of the season after endearing a late race caution, the victory however was not enough to make up ground in the championship standings and Bobby Hall is crowned your 2014 Pro Six track champion.

Randy Akers had the fastest time earlier in the afternoon and earned the top spot for their longest and final race of the year. With 15 of these drivers you would there would be some slicing and dicing but, that was not the case this evening. Besides the early caution on lap three when Kevin Morgan, who was making his first appearance in the Super Street division, had the motor expire in his machine.

Akers was able to lead all 50 laps and pick up win number four on the season, beating Landon Abbot by just over three tenths of a second. Reno Marchetti was able to bring home a third place finish while current points leader, and eventual champion, Sammy Gaita finished in a comfortable fourth place. Defending series champion Sean Calway ended his season with a fifth place finish.

Justin Fuller could have stayed home tonight with the points lead he had, but the true racer in him did not let him. Matter of fact he was able to qualify his machine on the pole but would elect to start from the rear.

That would leave the front to the likes of Shiflett – who has on several occasions this year jacked up a start/re-start – and previous winners Jesse Jones & Eric Shaffer. The two would actually have a pretty good battle all race while Fuller climbed his way back to the front. At the drop of the green flag everyone got a good jump but the leader her self, to avoid any black flags everyone had to slow up to let the 36 car cross the line first.

Shaffer would actually get the short end of the stick and get shuffled back to the fifth spot before the first yellow flag came out for the solo spin of Keith Wheeler, Mullet and Matthews locked their brakes to avoid any contact. They were successful in avoiding contact but did go for a spin themselves.

We did end up seeing a few more cautions involving Richard Ellis who ended up with damage, Thomas Gildea, who lost a right front tire and hit the wall a ton coming out of turn four. Shaffer was able to old off a late charge there from Fuller to grab win number two on this season.