Posted on August 2, 2014 by Justin Kern Leave a comment 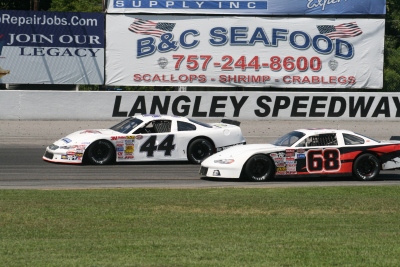 Hampton, VA – (July 26, 2014) Mother nature tried to play spoiler twice for us here at Langley Speedway this evening. As the largest race on Langley Speedway’s & The Weekly Racer’s schedule saw 37 Late Model Stock Cars headed to Hampton, Virginia. We started this deal around 4:35 with qualifying time trials where local driver Matt Waltz grabbed yet another pole clocking in at 16.071. Deac McCaskill, yes thats right Deac McCaskill, took his machine and grabbed the outside pole with a time of 16.113 for his first official race at the speedway. Brayton Haws, Greg Edwards, and Woody Howard would round out your top five starters

As the race got the green green flag at 11:21 PM Matt Waltz immediately went to work clearing McCaskill on the entry of one. Waltz and McCaskill, two very good drivers, checked out early creating about an eight car lead over third place driver Brayton Haws. Both Greg Edwards and Smith would go to war for the fifth spot while some of your Langley Speedway regulars and out of town drivers waged war deep within the field. Positions six through seventeen were all nose to tail for quite a few laps while leaders started working through some lap traffic.

The race saw its first of ten yellow flags on lap 27 for a flat tire of Tyler Ankrum due to a previous incident where the track bar broke causing the flat tire after contact was made with the wall. Nick Smith andC.E. Falk had no intentions of riding around as they rocketed their machines towards the front row. Well the good ole saying of cautions breed cautions were true in this event as cars started bouncing off each other left and right. The field stayed relatively clean for the remaining laps before the halfway break, a few solo spins here and there but no real damage.

(2/2) Even though we didn't get the results we were looking for, the fans and also the drivers knew we were there #HamptonHeat

Floating around all forms of social media were the amount of cautions run during this race and how “officials ruined this event” well I will be the first to tell you THIS WAS NOT THE CASE! Rain ruined this event and maybe some hard headed drivers fighting to gain as many positions on the track as they can. I will invite you to get a hold of scanner and tune into race officials and see how many times the race director had to give instruction on where drivers needed to be. Six or seven times the word had to be given to spotters and crews. One person suggested giving the black flag for the car that doesn’t want to “conform,” I can’t justify disqualifying a team because they want clarification on what is going on.

The caution flag waved at about lap 103 to indicate the half way point as well as the final nail in the coffin for both Waltz and Smith as both drivers pulled into pit road the following lap. Race control spoke on this during the drivers meeting, letting drivers know this is not the procedure. Waltz and Smith would have to restart session two at the tail end of the lead lap cars. Of course this caused a huge uproar within the stands as well on social media outlets.

Well it was a tough 2 days @LangleySpeedway but it was fun! #HamptonHeat

Coming from someone who spent their day in the tower got word that both drivers and spotters – in two separate meetings were these instructions given to these people – were told that the pace truck is to lead the field down pit road. Talking with some in the aftermath is that an official waved them down pit road, to me that is irrelevant. You were told to follow the pace truck in that is what you should do, 30 some other cars were able to do it, if race control let 2/37 cars – not to mention these cars were both local boys – rejoin the rest of the field like nothing ever happened it could have sparked a whole different story.

A fifteen minute intermission given to the drivers to make minor adjustments on their machines before Greg Edwards was given the top spot. As the green flag waved for the second segment it looked to be just what Edwards needed to bring home his first Hampton Heat victory. However, with the experience of C.E Falk, III and just about half a dozen cautions Falk had other plans. Electing to restart behind the leader gave another chance for a Langley Speedway ‘newbie’ to start on the outside pole. Dillion Basset, a young nomad, on the prowl for victories in big time races around the region, not to mention at the time sitting in 5th on the national leaders boards looked to add yet another track on his resume of wins in 2014. Danny Edwards, who had been out of the cockpit for a good chunk of the year finally had a great run and at one point at a decent shot at claiming the victory for himself was up in the top five mixing things up.

Falk, who has had his fair share of laps around Langley Speedway, made easy work of Bassett holding of the top spot! Bassett who looked poised to go home with at least a second place finish on the evening ran into some issues with another long time Langley Speedway local, and by issues I mean contact. That contact sent Bassett up the track past the second groove, which by the way was not as strong as previous races due to the two rain storms, causing Bassett to lose quite a few spots on the leaders boards. A late debris caution would send this race into over time but that was nothing for Falk has he would hold onto that lead capturing his third Hampton Heat victory of his career and taking home that big $10,000 purse