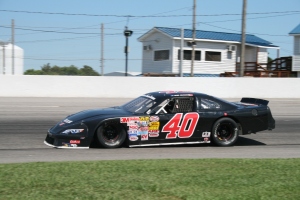 Hampton, VA – Mother nature tried to play spoiler twice for us here at Langley Speedway this evening. As the largest race on Langley Speedway’s schedule saw 37 Late Model Stock Cars headed to Hampton, Virginia. We started this deal around 4:35 with qualifying time trials where local driver Matt Waltz grabbed yet another pole clocking in at 16.071. Deac McCaskill, yes thats right Deac McCaskill, took his machine and grabbed the outside pole with a time of 16.113 for his first official race at the speedway. Brayton Haws, Greg Edwards, and Woody Howard would round out your top five starters

As the race got the green green flag at 11:21 PM Matt Waltz immediately went to work clearing McCaskill on the entry of one. Waltz and McCaskill, two very good drivers, checked out early creating about an eight car lead over third place Haws. Both Greg Edwards and Smith would go to war for the fifth spot while some of your Langley Speedway regulars and out of town drivers waged war deep within the field. Positions six through seventeen were all nose to tail for quite a few laps while leaders started working through some lap traffic.

The race saw its first of ten yellow flags on lap 27 for a flat tire of Tyler Ankrum due to a previous incident where the track bar broke causing the flat tire. Nick Smith as well as C.E. Falk had no intentions of riding around as they rocketed their machines towards the front row. Well the good ole saying of cautions breed cautions were true in this event as cars started bouncing off each other left and right. The field stayed relatively clean for the remaining laps before the halfway break, a few solo spins here and there but no real damage.

The caution flag waved at about lap 103 to indicate the half way point as well as the final nail in the coffin for both Waltz and Smith as both drivers pulled into pit road the following lap. Race control spoke on this during the drivers meeting, letting drivers know this is not the procedure. Waltz and Smith would have to restart session two at the tail end of the lead lap cars.

A fifteen minute intermission given to the drivers to make minor adjustments on their machines before Greg Edwards was given the top spot. As the green flag waved for the second segment it looked to be just what Edwards needed to bring home his first Hampton Heat victory. However, with the experience of C.E Falk, III and just about half a dozen cautions Falk had other plans. Holding off several hard charges from Bassett and both Edwards brothers, C.E Falk, III would win his third Hampton Heat race of his career.