Jesse Council Flies Into The Studio 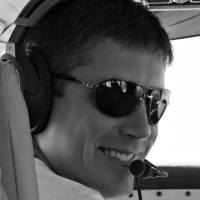 Jesse Council a commercial airline pilot from Robersonville, North Carolina started racing cars at the age of 16. ” My dad was a driver,” Council says. “I have to thank my dad Reno for inspiring me to want to race cars.” Racing for me is one of those sports that needs to grow on you. Let’s face it spending most of the day in the hot sun, strapping yourself into that hot cock pit, and going in “circles” trying to beat the other guys or girls can seem pretty dumb to some people right? Well for people like me and Jesse it’s what we love to do.

Since Jesse got his start in racing he has driven in eight different classes. “Everything from winged sprints, pro mods, and even modified eliminator drag racing,” Council explains about his track experience. You know, I’m always curious talking with drivers about what they have raced and what they want to race. I have talked to drivers gaining experience in four cylinder cars trying to save money for a full size car. I have talked to Late Model guys looking to impress K&N teams. Jesse on the other hand loves where he is at!

Now please don’t take that the wrong way in saying he doesn’t want to be better, he just loves the style of racing he is apart of! “I love Street Stocks,” Council proclaimed. “I don’t want to race anything right now!” I can totally see why he wouldn’t want to go anywhere. Council races at East Carolina Motor Speedway,  an up and coming NASCAR Whelen series track with one heck of a tricky turn two. Council and his gang of Street Stocks have out on some of the best racing of the year at that speedway. Off the track the drivers seem get along, have fun, and race the hell out of each other! I would stay where I was too!

It didn’t take long for Council to find that covenant piece of real estate we know as victory lane! Only five races before recording his first win! “I qualified on the outside pole with the exact same time as the pole sitter,” Council described. “We raced ten laps side by side until I got around to take the lead and my first win!” The rest for Council and his crew have been history. Collecting a few wins in the races we have attended this year at East Carolina. Mind you this, ECMS does not have time trial qualifying for these guys, they start by pulling a pill from a bag. So you can image how difficult it might be pulling a nine or a ten and charging back to take the win.

I try and get a feel of each driver we talk to and his or her accomplishments. Can be anything, could be everything! Something that has stuck out in your racing career that you will never forget. Jesse took to the garage to build a UCAR. For those who may not know these are front wheel drive, four cylinder, daily driven cars turned into race cars. Jesse spent the next week wrenching on a car for none other than his wife. “She was able to win her first and only start ever. I am proud my wife has a 100% racing record!”

To view all of our interview, please follow the link –> #3 Jesse Council