ROBERSONVILLE, North Carolina – Waking up at 0700 Friday morning and trying to force myself to get ready for my 8am to 4pm shift at my daily job I heard something no driver or race fan wants to hear. The pitter patter of rain drops hitting my window… okay that’s being extremely nice, these were little balls of liquid evil, assaulting everything around me and well pretty much the entire east coast. When you took a look out the window there was no way to start second guessing if we were going to be able to get the races in that evening. Luckily the storm had rolled through Carolina a little bit earlier in the night than it had in Newport News, Va where we are based out of.

We got reports from track officials that the weather had moved out of Robersonville early in the morning and by noon the sun was shinning, the air was relatively warm, and a nice breeze filled the track. We were going racing for sure that night, now the only thing that should be in my way was eight and a half hours on the time clock. I did everything in my power to stay busy at work while the store was pounded with rain because I knew if I didn’t I would pay attention to the time and the day would go by pretty slow!

Missed all of practice due to travel time but we were able to make it in time to see qualifying where Deac McCaskill again showed his strength behind the wheel and powered the #08 Grafix Unlimited, H&L Logging machine to yet another pole position with a time of 15.011. Tonight however, Deac had some new faces to defend what many would call “his track.” K&N Pro Series East and Langley Speedway LMSC driver Brandon Gdovic just one of the three Langley regulars to come down to the tricky tri-oval of East Carolina! Two time regional points champ and multiple Langley Speedway champ Mark Wertz another driver making his ‘re-debut’ (I say that because Mark last raced there in the early 90’s) at ECMS, another new face was Justin Carroll who I personally think would win Most Improved Driver Award if or when we ever start handing out rewards. Dont forget your ECMS regulars either, names like Shifflett, VanWinkle, Whitehurst and Burbage!

A total of eight cars took the green flag for the 100 lap main and final feature of the night at East Carolina. Brandon Gdovic would start this high-speed contest just to the outside of multiple feature winner McCaskill with a time of 15.254 (-0.243) a pretty impressive time for his first time around the speedway! Once the green flag was in the air it didn’t take long for the top two to start mixing it up as the nose of Gdovic pushed the rear bumper of McCaskill causing him to get a bit sideways and wash up the track coming out of two, credit that to cold tires, new track, little bit of excitement, or D) all of the above, Gdovic did the right thing though checked up and let McCaskill recover his car.

This opened the door for the #9 of Thomas Burbage to motor past Gdovic and chase down McCaskill. Took Burbage a few laps but he was able to pull up to the bumper of McCaskill and eventually take the lead on lap twelve. Not only took the lead but took it with force and immediately had a two car advantage on McCaskill who now rode in a pretty unfamiliar spot… second. Brandon mounted a pretty good run on the 08 for a little while until the turbo spoiled up or something on McCaskills car and he took off like a bat out of hell! McCaskill would take back his spot as race leader on lap 26. All the while Gdovic makes a huge move by the 9 of Burbage on lap 40 to take the second spot and would be the eventual finishing positions for both drivers. Burbage would soon run into unfortunate rear end trouble causing him to come home seventh on the night. “Car was great to start with, just need a rear end to stay under it for 100 laps,” a response to a twitter post we made about how hard he drove to the lead.

Lap 68 played host to the first caution of the night as officials spotted fluid in turn two! A pretty short caution but it allowed for tires to cool and the field to regroup. When the green flag was finally back in the air McCaskill & Gdovic stayed side by side until the exit of turn two where McCaskill’s car just looked to have a bit more bite coming off and he would put one to cars between him and Brandon. As we all know cautions breed cautions as we saw that pesky yellow again on lap 72 as the 91 of Carroll & the 44 of VanWinkle make contact and the 91 comes to a stop in turn three. Three cars came down pit road to the attention of their crews, Wertz for a chassis adjustment, Carroll & VanWinkle with cosmetic damage.

Restart number two now on deck which would prove to be the catalyst in some good ole short track racing! Gdovic again tried to look inside the 08 but Deac just to powerful of the corner Gdovic tucked into the second spot. Meanwhile the 91 and 44 still continue to run side by side. By lap 78 the lack of a rear spoiler may have hurt the car of VanWinkle as he began to fall backwards and fast and would eventually spin on lap 84 to cause the final caution and hit the final nail in his coffin.

With sixteen laps to go coming to the green flag your top three all but had it in the bag and would eventually spread out to about five car lengths each. Mark Wertz really came on strong in the closing laps as he was not gong home with out a fight! With four to go Wertz made his move past the #44 of VanWinkle to secure his top five finish on the night. The checkered flag flew over the #08 again in familiar fashion as Deac captured yet another win in 2014!

“We have had an awesome start, the more laps we get, the more comfortable I get, the faster we get,” McCaskill said in victory lane. All night Deac had proved he was the fastest car on the speedway pulling to about a five to six car lead after each restart. “I appreciate Gdovic, he had a good run first time here,” said McCaskill. “This tracks a challenge for these newcomers coming in here but I think wants they come back they will get it figured so we just have to stay on top of it.” Deac went on to thank his sponsors H&L Logging, Ford Racing, WP Shocks Mel’s Ignitions for all of their dedication and help getting him into victory lane five times now this year at East Carolina Motor Speedway. 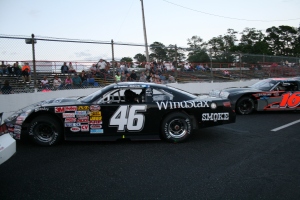 Second place on the night went to a fresh face to ECMS, the #46 of Precision Performance Motorsports driver, Brandon Gdovic. Brandon Gdovic in previous years have been running full-time in the K&N Pro Series East Division. In 2014 Gdovic will run a part-time Pro Series schedule, which will give him some time to run in the weekly series running his Late Model, in addition he will run some Legend & Modified events. “I had a lot of fun, it was my first time here and its a different track for sure but I had a good time,” Gdovic said after the race. “We were a lot closer than I thought we were going to be, I was a lot better on the longer runs.” Brandon was pretty optimistic about figuring the track out and giving McCaskill a run for his money, “We’ll work on it a little more and come back and see what we got for him.”

Third place on the evening went to long time Langley Speedway driver Jeff Shifflett who drives the #01 Moyock Automotive machine! Which by the way was an amazing turn around for that team who started just one spot from last in seventh with a qualifying time of 15.552 (-0.541). Goes to show if you hit your marks, save a little bit of your stuff for the end and work your way around traffic you will be there in the end. 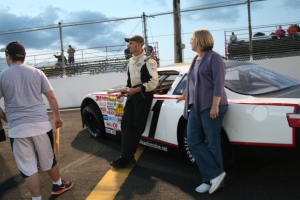 Things got a bit dicier towards the rear of the field as new faces tried to mix with old faces. New comer Justin Carroll & East Carolina veteran Josh VanWinkle spent a good chunk portion of the race battling back and forth. Carroll would eventually capture his first top five finish of his Late Model career! A hard-fought top five at that as he was the eighth and final car on the grid, put through the ringer with VanWinkle, and more than likely a bit of an ill handling car. Hopefully Justin will be able to return in two weeks along with his father Terry Carroll and work on figuring out how to make the car faster

Mark Wertz and the #55 Dunkin Donuts machine rounded out the top five on the evening. “Not the finish we were looking for,” Mark told us after the races were over. “The car is better than that we just need some more practice. We tried to loosen it up there on that stop and we just got to loose, either way it was still a top five finish and we will take that, we will come back and figure it out.” 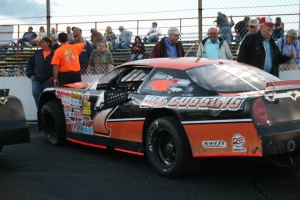 Louise White was out to an early lead in the 50 lap Limited Late Model feature! White has been a pretty dominate force of nature in this division all season. The #10 of Michael Fose was strong early in the race as he applied pressure to the bumper of Rusty Daniels, he would eventually fall off the pace as the race went on but would take home a top five finish. Courtney Hardin earned what could have been named the most respectful move of the race as the leader was flying off of turn two she pulled all the way to the inside of the track to allow him easy passage. Hardin who has been fighting strong all year would eventually slow way off the pace which draws the caution out for a little bit of clean up. When the green flag flew White hit the nitrous button and was gone. Garrett Marchant who had worked his way up to third and attempted a huge move off turn four coming to the checkers but just wasn’t enough came home third

Kevin Pierce put his unbeaten streak on the line Friday night and was able to take home yet another trophy this season! Just about the only race to watch on the track was the battle for second with Ipock (51) & Barnes (45). Ipock took over P2 duties for a while but eventually handed it back over to Barnes after losing the handling on the car, looked like he just drove the right rear tire of the car.

Six UCARS took to the track for their feature where David Wiggins would come out the victor over Duane Walker. Walker did look to make a move to the lead on lap ten just could not mount a good enough charge and had to settle for a second place on the evening. One of the smallest races on the evening were the street stock with only three cars showing up for the main event for some reason. As you could imagine with only three cars running twelve laps it was a pretty easy race. the #902 of Kevin Benson came home in victory lane with Jesse Council taking second place