Young Driver Garrett Marchant Stops by to Share His Story 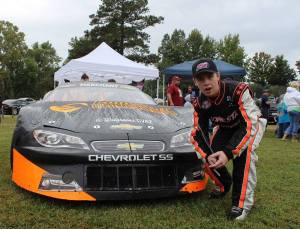 I would like to start this weeks story off with a HUGE thank you to Garrett for getting back to me in such a short notice! We lost contact with one of the drivers from the west coast that we were going to feature this week, we had reached out to Garrett to get him on the schedule anyhow, so thanks for such the quick response we have filled the spot and will not have to change the entire schedule around. Thank you so much for that young sir! With out you guys and even gals this entire series would fall by the way side! Again I ask if you are a driver reading this or a fan and know a driver that would be interested please send us an email to info@theweeklyracer.com and we will work on getting in touch!

In the studio this week we have a young driver who has proven to me he like many other young drivers that he has an addiction… an addiction to stock car racing! Along with that addiction is the drive to do what ever he can in his power to fund this addiction. Garrett Marchant is a 17-year-old rising senior from the small town of LaGrange, North Carolina! Growing up Marchant told me he enjoyed playing baseball and was pretty good at it, but from the moment he sat in a race car baseball was put on the back burner!

Garrett is actually a third generation driver from the Marchant stables, both father and grand father raced in the past and are still actively involved within the racing community as a matter of fact. Marchant started his journey through the motor sports community in the year of 2010 at the age of 14, one could argue that is a little bit late of a start for kids these days, but one can also argue putting your child in motor sports any earlier is not safe. Good thing that is not my job to decide on any of that! I will stand up and applaud this young man for trying everything in his power to fund his race car!
END_OF_DOCUMENT_TOKEN_TO_BE_REPLACED

Joining us this weekend for a little bit of a different format we are trying is the wheelman behind the #36 Grandstock at Langley Speedway in Hampton. Virginia. Condrey comes to us from Henrico, Virginia to talk racing, interests and plans for the future. We both hope everyone enjoyed the first part of the interview and would appreciate some feedback, in the past I have posted both the story and the interview on the same day so this weekend I have decided to change it up. I want to know what you like better; story & interview on the same day, interview first then story or story then the interview on different day. Any and everyone’s input is more than welcome, driver and readers alike!

END_OF_DOCUMENT_TOKEN_TO_BE_REPLACED

HAMPTON, Va – “The boys are back in town – the boys are back in town” a song from the 70’s that plays in my head every saturday afternoon when I pull into the parking lot of Langley Speedway. This past Saturday was just about perfect for local, hometown short tack racing. All afternoon the sun was shinning, we were in the mid 70s with a nice cool breeze to boot. I decided to take full advantage of my complete day off of work and got to the track around noon, figured I would visit with those drivers who made the trip out to East Carolina the night before (that race recap can be found here -> Gene Herron Night at the Races – www.ecspeedway.com). Getting there early also gave me plenty of time to visit some of the guys we have had on the website and get some decals on their cars, it was crazy because at one point I had guys asking how they can get their own sticker! Also gave me plenty of time to get set up in my new office – I have actually commandeered the corner of the turn one spotter stand, gotta start somewhere right!

END_OF_DOCUMENT_TOKEN_TO_BE_REPLACED

ROBERSONVILLE, North Carolina – Waking up at 0700 Friday morning and trying to force myself to get ready for my 8am to 4pm shift at my daily job I heard something no driver or race fan wants to hear. The pitter patter of rain drops hitting my window… okay that’s being extremely nice, these were little balls of liquid evil, assaulting everything around me and well pretty much the entire east coast. When you took a look out the window there was no way to start second guessing if we were going to be able to get the races in that evening. Luckily the storm had rolled through Carolina a little bit earlier in the night than it had in Newport News, Va where we are based out of.

We got reports from track officials that the weather had moved out of Robersonville early in the morning and by noon the sun was shinning, the air was relatively warm, and a nice breeze filled the track. We were going racing for sure that night, now the only thing that should be in my way was eight and a half hours on the time clock. I did everything in my power to stay busy at work while the store was pounded with rain because I knew if I didn’t I would pay attention to the time and the day would go by pretty slow!
END_OF_DOCUMENT_TOKEN_TO_BE_REPLACED

Michael Chapman Looking To Get Back To The Track More

New to the website this week please help me welcome UCAR driver Michael Chapman! This is an exciting weekend for me because Michael is the first fan suggested driver to make it on to the website! I love the fact that my readers are enjoying this season and letting me know who to talk to, and how eager and excited Michael was to take this interview. Now if I could just take a moment and thank Michael and everyone who has been apart of this series for allowing me to pick your brains. Every weekend I love seeing all the visitors to the links, love seeing comments on those posts, without you guys & gals this website wouldn’t have taken off like it has and I thank each and every one of you for that!