Okay guys sorry, I know its been a while since I have posted anything. Probably not good specially when your trying to get the blog started and get more people to read. Kind of hard to read when nothing is being posted. One of my co-workers has been gone on vacation this week so I have been working just a little bit more. Also does not help it being so close to christmas, we actually get pretty busy. Hopefully with him back I have more time to write to all of you. I appreciate the amount of traffic to the Driver Series page. I am starting to get more drivers interested. If you are interested or know someone who is, have them get in contact we me via email; theweeklyracer@gmail.com

So now that we have that little bit of information under control, I wanted to spend some time talking about these changes that NASCAR just announced for the Whelen All-American Series…

Starting next season, a national champion will be crowned in all five divisions of the series. In recent seasons, the Finalist Program honored top competitors in Div. II-V. NASCAR.com

Now this is something I am all for! NASCAR honoring those drivers and crews who may run at smaller tracks. I have still yet to actually figure out what makes a track Division I or II. After some extensive research on one of my days off, the one main thing I could come up with was the premier division at the track. You know, if the feature race at that track are Late Models then they are Division I, and those tracks who don’t have late models fall into Division II or below. Please if you have a better explanation on the break down please leave a comment below. This makes more sense, just because the track is in a lower division does not mean the drivers are any worse, and the competition is weaker! 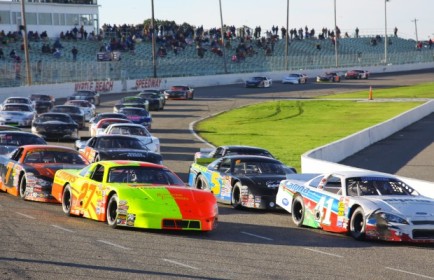 Now the track champion, will be determined by points earned at that track according to the NASCAR rule book. However, a few tweaks have been made to the scoring system that in my opinion are going to corrupt the weekly racing series. Now NASCAR and fellow track owners say they feel this will bring an “added element to the weekly racing series.” These added elements are as follows;

Okay so for those who may not know. The old system was set up to give drivers two points per car up to twenty cars. The winner would then get five bonus points. Second place on back would receive two fewer points and so on. With this rule change the bonus structure has also changed as mentioned above. Starting from the pole position may just be a thing of the past thanks to this rule change!

This is the rule change that does not sit well with me! Unless tracks decide to start awarding pole winners with some cash value, qualifying will soon become a half throttled, tire scrub session. I come from a track that uses an invert rule to start with. The pole sitter spins and wheel and will invert up to the top six. Even when the top six get inverted with the help of the cone rule, they’re back up to battling for the lead.

Coors Light Pole award. Is it a thing of the past?

Yea I guess it could encourage more actual racing. I can’t lie and say it wouldn’t be interesting to watch Lee Puliam, or Tommy Lemmons Jr, or Nick Smith flying through the field from tenth. At the same time I really don’t like when drivers and teams sand bag! Look at this example, assuming both tracks start no less than twenty cars. Driver A races at Langley Speedway on a regular basis, starts on the pole, inverts the top three and wins the race. Driver A by the new rules will get 43 points (40 for the win, 3 pts for a single starting position). Driver B runs at Southern National, goes out and runs just fast enough to start tenth. 100 laps latter driver B wins the race, he/she gets 45 points (40 for the win, 5 pts for a double-digit start).

I can’t say this system is flawed, heck I’m sure there were some pretty high level people in NASCAR who thought this through. I just think back to how one-sided some of these tracks can be. It’s not like any driver can win just about any ole’ weekend. Lets be honest, a lot of these weekly racing tracks have a select group of drivers that end up in victory lane. The Whelen series will officially kick off January 1st and run through September 21st. Should be exciting to see how these changes truly effect the season.